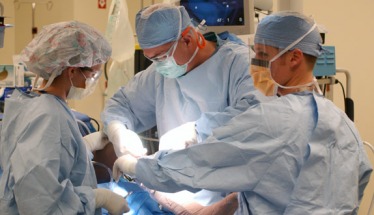 A doctor is someone who practices medicine to treat illnesses and injuries.

Doctors go to medical school to be trained. They typically hold a college degree in medicine. Doctors once made house calls to treat patients at home, but now mostly see patients in their offices or in hospitals. Doctors may also work for schools, companies, sports teams, or the military. Doctors are often assisted by nurses or other staff.

Doctors treat patients by diagnosing them, or figuring out what is wrong. When doctors diagnose a patient, they begin by asking questions about the patient's symptoms such as fever, headache, or stomach ache. They may ask other questions about things like past illnesses or family members who have been sick. They will then examine the patient, often looking at different parts of the body and listening to the heart and lungs with a stethoscope. Sometimes they may need to collect blood, use an x-ray machine, or use other tools to look for things they cannot see when examining the patient. Usually, when they have gathered enough information, a doctor can make a diagnosis and then prescribe a treatment. Often they prescribe drugs.

Some doctors specialize in a certain kind of medicine. These doctors are called specialists. They may only treat injuries to a certain part of the body, or only treat patients who have certain diseases. For example, there are doctors who specialize in diseases of the stomach or intestines. Other doctors are "general practitioners" or "family practitioners". This means that they do a little bit of everything. They try to deal with as much of a patient's health problems as they can without sending them to a specialist. A doctor who performs surgery is called a surgeon.

Other kinds of doctors specialize in treating eyes. They are called eye doctors, or optometrists. They give people glasses or contact lenses. Doctors who specialize in treating feet are called podiatrists. They often give people medicine for feet, such as creams. These doctors are usually found working in their own offices, as opposed to other offices.